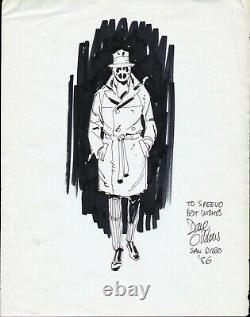 And check out OUR NEWLY LISTED ITEMS. This is a classic full-figure pinup piece featuring Rorschach by Dave Gibbons done in marker on 11" by 14" paper. Signed and dated from San Diego in 1986, when The Watchmen by Alan Moore and Gibbons was being launched upon the world.

The actual image area is very nice, and the piece could be matted and framed around the image area so that the wear would not be seen. We usually only see smaller headshots of this character, and almost never see pieces of this vintage, so a full-figure straight-on pinup image of this quality and from this time period, is spectacularly awesome. The Watchmen introduced such great characters as Dr. Manhattan, Rorschach, The Comedian, Silk Spectre, Nite Owl, and Ozymandias, and brought a depth and realism to comics that it had arguably never seen before.

It is one of Moore's finest works, ranking up there with Batman The Killing Joke, Miracleman, V For Vendetta, From Hell, the League of Extraordinary Gentlemen, and Saga of the Swamp Thing. The Watchmen is considered by many to be the greatest comic book work ever created, and is certainly the most important and influential work produced in comics in the last 25-30 years. It has only grown in stature since the release of a movie adaptation, and now an HBO TV series as well. This is a truly spectacular piece for any fan of this landmark series, and would look fantastic framed and prominently displayed. Check out our other auctions for more great items. Check it out, you'll be glad you did! The item "1986 DAVE GIBBONS RORSCHACH WATCHMEN ORIGINAL ART FULL-FIGURE PINUP ALAN MOORE" is in sale since Monday, August 19, 2019. This item is in the category "Collectibles\Comics\Original Comic Art\Drawings, Sketches". The seller is "satchj3" and is located in Brooklyn, New York. This item can be shipped to United States, Philippines, Cayman islands.