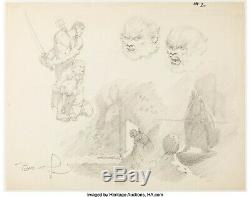 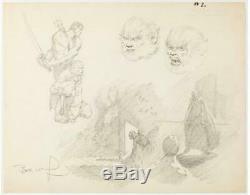 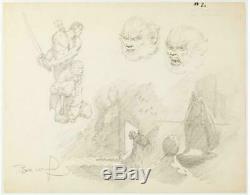 BERNIE WRIGHTSON - WEREWOLF Character Study Sketch ORIGINAL ART (1979). A full page of werewolf sketches and various other characters, as well as a dramatic scene. All rendered in graphite on art paper measuring 17" x 13.25".
In the realm of fantasy-horror illustration, Bernie Wrightson's work remains unsurpassed, and this drawing is one of his earliest forays into film work. After the success of the Star Wars film, Bernie Wrightson was approached by a small firm to design the main characters for a prospective SF/fantasy movie. It was a speculative project, entitled "Traveler, " and was never produced. The main character had a touch of the E. Burroughs John Carter of Mars flavor, and his companion was a Chewbacca-like werewolf. Reproductions of the work that Wrightson produced for this project were featured in the Berni Wrightson: A Look Back hardcover retrospective published by Land of Enchantment in 1979. Signed and in Excellent condition.
The item "BERNI WRIGHTSON Signed WEREWOLF Character Sketch ORIGINAL ART 17 X 13.25" is in sale since Wednesday, July 1, 2020. This item is in the category "Collectibles\Comics\Original Comic Art\Drawings, Sketches".
The seller is "neworleanscomics" and is located in West Monroe, Louisiana. This item can be shipped to United States.