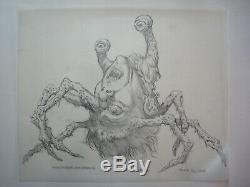 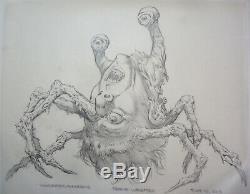 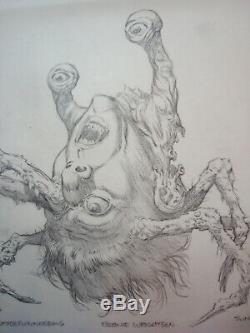 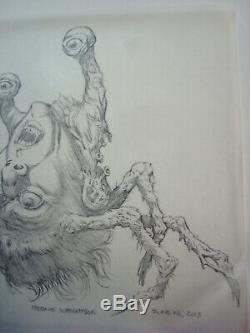 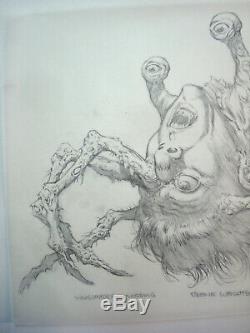 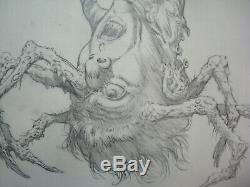 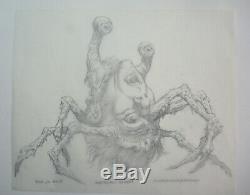 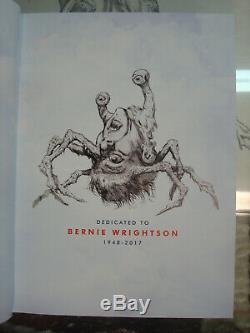 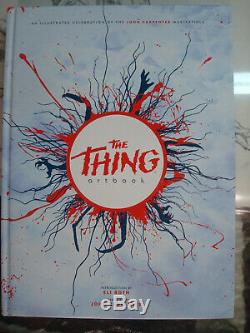 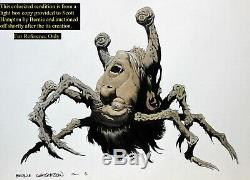 While most people were still enjoying the release of ET and it's cute little alien, many of us more hardcore "Sci-Fi Fans" were enthralled by the incredibly gory (non-digital) graphic effect of "The Thing", with this horrifying creature being a major standout in the film. I knew Bernie was not involved in the original John Carpenter layouts, so I asked Bernie at the Dallas ComicCon and he told me he was watching the film, saw this scene, and just couldn't resist pausing the movie to generate this sketch while the image was fresh in his head. Bernie signed the piece, titled it: "YouGottaBeF'inKidding". And dated the sketch June 16, 2013.

Sadly, Bernie passed in 2017 and posthumously this piece was published as the dedication page in the book: "The Thing - Artbook", by Printed in Blood. The coffee table book recognizes the film on it's 35th anniversary, and collected 375 notable artist renditions and interpretations of their favorite scenes from the movie. The artwork is drawn on 13 3/4"w x 16 3/4"t rice paper which is in excellent condition, other than a few of Bernie's fingerprints, and a very small tear by Bernie!

In the extreme bottom left corner, which I repaired with a small (1/2"x1/2") piece of LineCo's acid free repair tape on the reverse. The repair is over an inch from the artwork and would be matted out completely if framed, but I fixed it in order to avoid future problems. I have described this original artwork as best I can, but to augment my description I have provided several high-resolution images of the artwork from varying angles and with close-ups to allow for a detailed review of quality, condition, and desirability. I also included a screen capture of the Spider Head from the movie, and a colorized light boxed image of this artwork which was colorized by Scott Hampton and auctioned several years ago. If you have any questions, additions, corrections, or concerns, feel free to message me. The item "Bernie Wrightson John Carpenter The Thing You Gotta Be F'in Kidding Original Art" is in sale since Sunday, February 16, 2020. This item is in the category "Collectibles\Comics\Original Comic Art\Other Original Comic Art". The seller is "cheechwizard" and is located in Wichita, Kansas. This item can be shipped to United States.