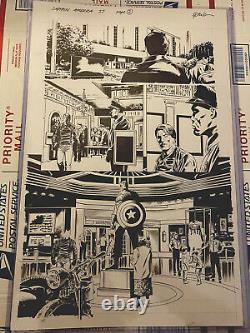 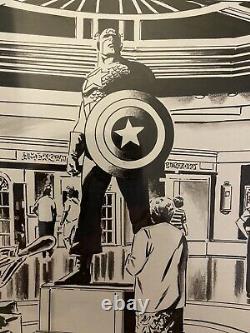 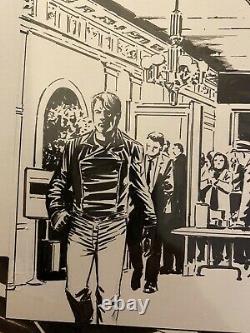 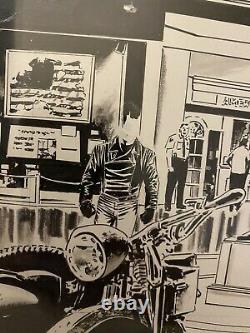 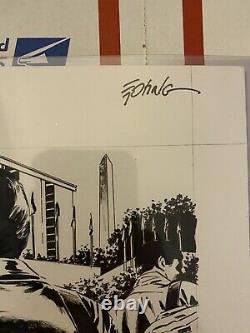 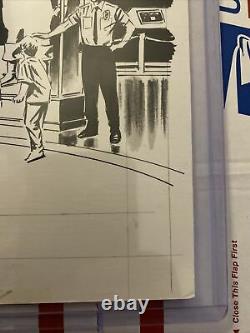 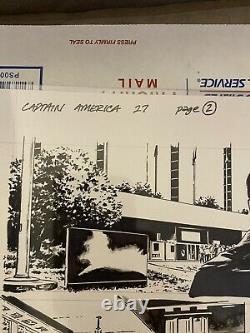 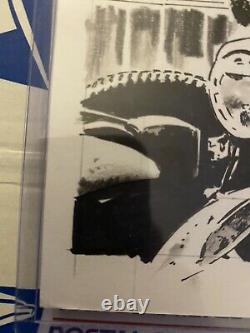 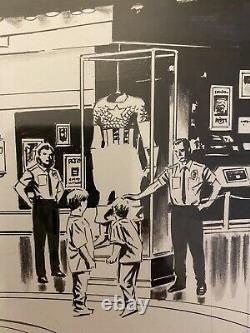 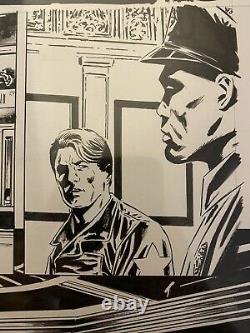 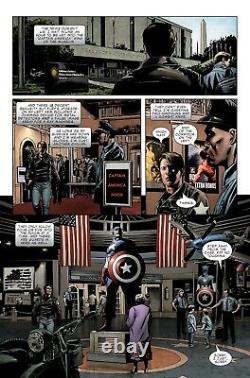 CAPTAIN AMERICA #27 PAGE 2 ORIGINAL COMIC ART BY STEVE EPTING FEATURING WINTER SOLDIER AT CAPTAIN AMERICA MUSEUM WITH EPTING SIGNATURE. This awesome one of a kind piece is the original comic art by Marvel comic artists Steve Epting. It appeared in the 5th series (2005) written by Ed Brubaker and takes place shortly after the Death of Captain America. The comic in which the art was used is from August 2007z The artwork is the actual penciled and inked issue by Epting. It features the scene where Bucky aka The Winter Soldier secretly tries to stake out the Captain America Wing in the Smithsonian Museum in Washington in order to obtain Caps shield. (Bucky figures out that it is a replica). A very similar scene was used in the film Captain America: Winter Soldier. In a post-credits scene, Barnes visits his own memorial at the Smithsonian Institution, trying to piece together his identity. The original art has Eptings handwritten signature on the top right corner.

The original art appears to be in excellent condition with minor to no wear. Some light wear to some of the corners/edges, very minor to no yellowing of the page. The piece does not have the lettering, and features some interesting artist touches and unfinished areas such as the bottom panel where the Winter Soldiers face is missing. Also can see where some artist tape must have been was used. The more you look, the more details and artist process you may discover!

The Captain America status in the bottom panel is pretty cool! The piece looks to be in excellent shape maybe VF/NM.
In the photos I included images from the colored comic and the film for comparison but those are not included, just the original comic artwork. CHECK THE PHOTOS AND BE AMAZED! For any fan of Captain America, Winter Soldier and Original Comic Art! Get this before the new Winter Soldier and Falcon Disney+ show premieres! The item "CAPTAIN AMERICA #27 PAGE 2 ORIGINAL COMIC ART STEVE EPTING WINTER SOLDIER MUSEUM" is in sale since Sunday, October 11, 2020. This item is in the category "Collectibles\Comics\Original Comic Art\Other Original Comic Art". The seller is "islanders112002" and is located in Valley Stream, New York. This item can be shipped to United States.