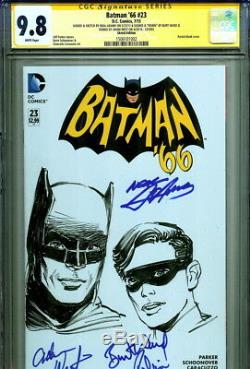 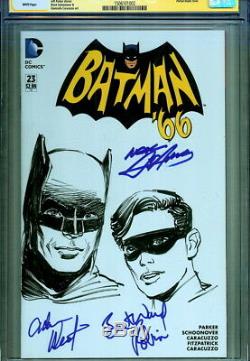 This copy of Batman'66 #23 is the blank sketch cover variant- and is signed by hand by Adam West and Burt Ward and also features an original sketch of both actors in their iconic roles of Batman and Robin. The original, hand-drawn sketch itself is by one of the greatest comic artists of all time, Neal Adams, who began working on the Dark Knight Detective during the Television series original run and whose comic work is still most closely associated with the character. Batman 66 is the first comic book series to be based on the TV show itself. Of note, this issue is not personalized by West (a great rarity as West virtually never autographs any item without also including a personalization of "To" so and so in addition to his signature).

Professionally graded by CGC, it is part of their special Signature Series. With Signature Series books a certified witness, employed by CGC, actually observes the signing/sketching of the comic and then immediately takes possession of the book so there is no possibility of the real autograph and artwork being switched out with another.

One of the biggest phenomenons in television history, the 1960s Batman TV series influenced an entire generation of fans and possibly even helped save the Batman comics themselves from cancellation. Debuting in 1966, it changed Batman from a reasonably successful DC comic character into a true global icon.

The series also created a merchandising bonanza exceeded only by Star Wars a decade later, turned the Batmobile into the most recognized fictional car of all time (surpassing all others contenders, before or since, including such icons as KITT, the General Lee, and James Bonds Aston Martin DB5), and forever added its own catch phrases into the pop-culture lexicon- such as Robins famous Holy whatever quips and Same Bat-Time, same Bat-Channel. In significant ways the TV series also made lasting contributions to the comic book continuity; the creation of Batgirl - a character specifically introduced into the comics for inclusion in the Television series - and, perhaps most importantly, returning to prominence the four classic villains of the Joker, Catwoman, the Riddler, and the Penguin (all of which were shelved for years due to the impact of Fredric Werthams anti-comics exposé Seduction of the Innocent).

Neal Adams is the definitive Batman artist of the late 1960s and early 1970s and, according to Atlas Top 100 List, is the greatest living comics artist of all time (only Jack Kirby at #1 and Will Eisner at #2 rank higher). Having changed the look of comics forever, a generation of imitators followed in his wake, dividing comics into essentially two categories; what came before (the Jack Kirby Era) and what came after (the Neal Adams era). His first published work on Batman - as the inker - appeared on the cover of Detective Comics #370 (December, 1967) and his first pencils and inks on Batman appeared just two months later in issue #372. His first Batman cover, issue #200 which he also penciled and inked, appeared the month after that.

Soon, he was doing many covers and interior stories for the Dark Knight Detective, slowly transitioning the Batman comics from the campy influence of the TV series back to his darker roots. Indeed, Adams is one of the last living Batman artists who worked on the Dynamic Duo during the television series original run (from January 1966 until March 1968). CGC is an independent, third-party grading service that grades and then encapsulates comic books. This encapsulation process has potential inherent results. These include, but are not limited to, either the left, right, or both sides of the outer case not being sealed completely, an appearance of waviness, or the existence of Newtons Rings (an interference pattern created by the reflection of light between two surfaces) that can appear and are frequently mistaken for moisture or oil inside the case (in actuality, this effect is between the inner softer plastic shell and the outer, hard plastic shell and are not on the book itself). These and other results can occur during the encapsulation process. These effects, however, do not in any way affect the book itself or its designated grade. As the CGC book is tightly encapsulated inside the soft plastic case, this will not result in damage to the book. If you are sensitive to any of the above outlined issues regarding CGC cases poorly sealed sides, Newtons Rings, general imperfections in the plastic case, slight movement of the interior soft-plastic case inside the outer shell, etc. Please inquire for full details. We package items extremely securely. We apologize for any inconvenience and appreciate your understanding. Your government may impose upon you before they will release the package to you. Excepting pack-pulled autograph trading cards, CGC Signature Series, signed Sideshow prints, and like collectibles, all autographed items Vault Collectibles sells were personally witnessed, by myself, being signed by the writer, artist, or celebrity in question. No third party is involved. Further, art sketches - and most published original art I sell - were obtained directly from the artist themselves.
For buyers desiring this guarantee in written form, this statement guarantees that the above referenced item is as stated in the listing description. As this serves as written proof of said guarantee, no physical documentation will be included in the package when the item is mailed. The item "CGC SS 9.8 Batman'66 SIGNED Adam West Burt Ward Neal Adams Original Art Sketch" is in sale since Thursday, April 11, 2019.

This item is in the category "Collectibles\Comics\Modern Age (1992-Now)\Superhero\Batman".auctions" and is located in Ringgold, Georgia.