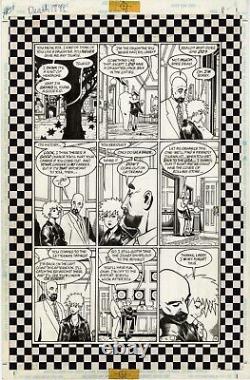 DEATH: THE TIME OF YOUR LIFE #1 PAGE 11 Sandman Neil Gaiman Bachalo Original Art. Primary Artist Name: CHRIS BACHALO. Secondary Artist Name: MARK BUCKINGHAM. Dimensions: The art has an approximate image area of 10.5" X 15.5". 1996, Foxglove from the world of Neil Gaiman's The Sandman. This Chris Bachalo page comes from his second Death mini-series created with writer Neil Gaiman and published in 1996. The page features the singer/songwriter Foxglove, a key supporting character in the Sandman saga starting with A Game of You, which began in The Sandman #32 (1991). Neil Gaiman's The Sandman is one of most important comic book series in the history of the medium as it was one of the first to demonstrate the literary merits of graphic storytelling. The two Death mini-series by Gaiman and Bachalo are considered to be an important part of the overall saga. In the historic The Sandman #8, readers met the series' most popular supporting character, Death, the sister of Dream of the Endless AKA the Sandman. The personification of Death itself, the character broke new ground by being depicted as a young goth-like girl who spoke like a contemporary young woman who just happened to be the grim reaper. The character's popularity led Gaiman to develop a spin-off mini-series, Death:The High Cost of Living. It was an extremely popular series that led two a second mini-series a few years, later--the one featuring this page. Chris Bachalo has been applying his artistic talent to the comic book medium now for close to 30 years. His first breakthrough was drawing the landmark The Sandman #12, a key chapter of the famous "Doll's House" storyline. He would go on to work on both high-profile Death mini-series and then move to Marvel where he would launch Generation X, work on Uncanny X-Men and eventually Spider-Man during the "Brand New Day" phase. The item "DEATH THE TIME OF YOUR LIFE #1 PAGE 11 Sandman Neil Gaiman Bachalo Original Art" is in sale since Tuesday, February 23, 2021. This item is in the category "Collectibles\Comics\Original Comic Art\Interior Pages". The seller is "ssdartandtoyfan1989" and is located in Jersey City, New Jersey. This item can be shipped to United States.