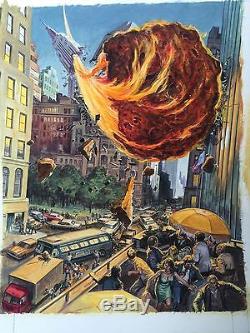 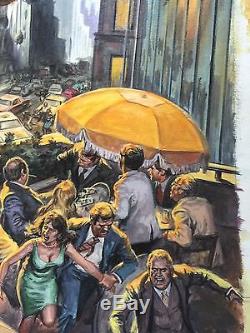 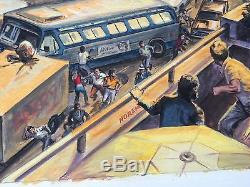 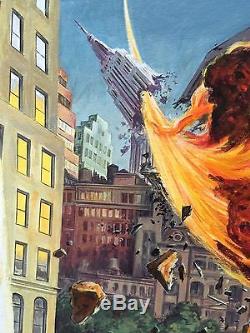 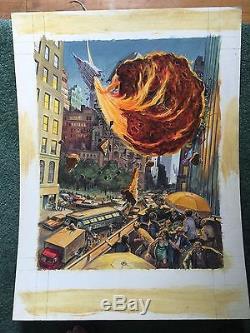 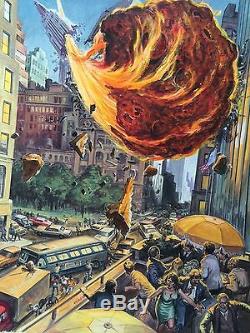 It is a privilege to sell this work consigned directly from Earl's family. Earl Norem has been a prolific painter of inspiring works. His fine art style has appeared on the covers of Marvel Comics, Topps Trading Cards, Novels, Magazines and more. He is well known for his work on Savage Sword Of Conan, Spider Man, Planet Of The Apes, Mars Attacks, Transformers, G. Joe, The Million Dollar Man, The Hulk, Fantastic Four and Wizards & Warriors. Magazine works include Readers Digest, Field & Stream, Real West, Discover & more. Also package design and art for toy companies such as Mattel, Hasbro and Mego, as well as program covers for the New York Yankees. Mayhem follows an explosion from the Empire State Building in New York City. Looks like a meteor strike to me. I don't know where this was published but may be for Topps Trading Cards, Alien, Mars Attacks?

Anyone out there that recognizes this piece please let us know! Another great piece of Norem art! CONDITION: Very good with some glue residue in the margins. Please refer to photos for further detail. The current auctions are scheduled to begin and end at five minute intervals.

Take a moment to look at them all. I welcome any questions/comments you may have. The item "EARL NOREM Original Art EMPIRE STATE BUILDING NYC METEOR STRIKE Signed Painting" is in sale since Saturday, July 02, 2016. This item is in the category "Collectibles\Comics\Original Comic Art\Paintings". The seller is "gkensek" and is located in New Milford, Connecticut. This item can be shipped worldwide.