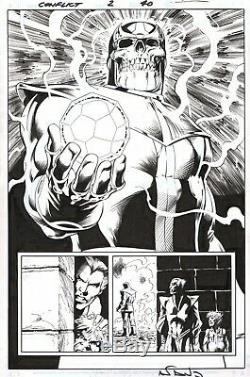 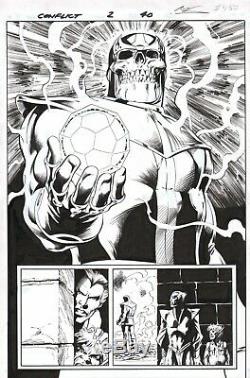 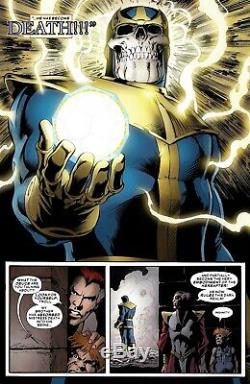 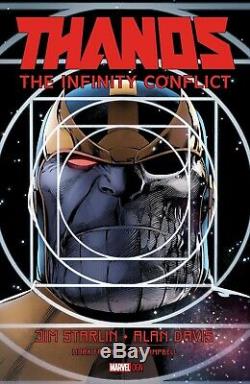 Featuring the work of Alan Davis (pencils) and Mark Farmer (inks), with story by Jim Starlin, this page is from The Infinity Conflict. It features Thanos - he just murdered Death and, on this page, he is first shown with the skull face (having assumed Mistress Death's mantle).

The mad titan is on another quest- this time, to encompass all existence, defeating then assuming the roles of several cosmic entities to become creation itself rather than merely control it. A truly stunning page of Thanos! Please note- this is the actual, original art page used in the production of the comic.

It is not a copy, print or pre-printed image. It is a one-of-a-kind original. Also shown - for reference only - are the cover to the comic the page appears in as well as the final, colored page with text as it appears in the comic. But please note- the comic is not included in with the listing. They are shown for reference only- the listing is for the original art only. It is signed by both Davis and Farmer. Please further note- Davis creates prelims, prints them out on 11 by 17 inch art board, then tightens the image with original pencils over those prelims. This page is therefor a combination of the print out of the original prelim, original pencils by Davis, and Farmers original inks. So this page is not a blueline page (copies of the artists pencils inked by hand by the inker). It is Farmers original inks over Davis' original pencils over Davis' enlarged and copied preliminary sketch. Excepting pack-pulled autograph trading cards, CGC Signature Series, signed Sideshow prints, and like collectibles, all autographed items Vault Collectibles sells were personally witnessed, by myself, being signed by the writer, artist, or celebrity in question. No third party is involved.
Further, art sketches - and most published original art I sell - were obtained directly from the artist themselves. For buyers desiring this guarantee in written form, this statement guarantees that the above referenced item is as stated in the listing description. As this serves as written proof of said guarantee, no physical documentation will be included in the package when the item is mailed.
The item "Infinity Conflict Alan Davis Original Skull Art Splash Page Thanos Becomes Death" is in sale since Sunday, August 25, 2019. This item is in the category "Collectibles\Comics\Original Comic Art\Splash Pages".auctions" and is located in Ringgold, Georgia. This item can be shipped to United States, Canada, United Kingdom, Denmark, Romania, Slovakia, Bulgaria, Czech republic, Finland, Hungary, Latvia, Lithuania, Malta, Estonia, Australia, Greece, Portugal, Cyprus, Slovenia, Japan, China, Sweden, South Korea, Indonesia, Taiwan, South africa, Thailand, Belgium, France, Hong Kong, Ireland, Netherlands, Poland, Spain, Italy, Germany, Austria, Bahamas, Israel, Mexico, New Zealand, Singapore, Switzerland, Norway, Saudi arabia, United arab emirates, Qatar, Kuwait, Bahrain, Croatia, Malaysia, Brazil, Chile, Colombia, Costa rica, Panama, Trinidad and tobago, Guatemala, Honduras, Jamaica, Viet nam, Uruguay.