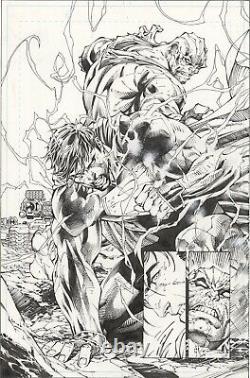 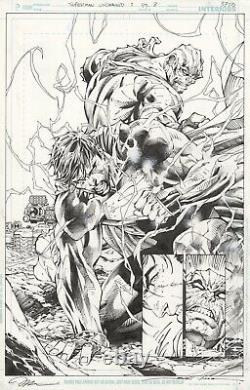 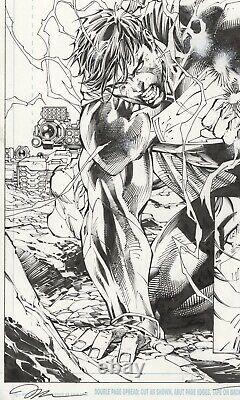 JIM LEE SUPERMAN UNCHAINED #3 SPLASH EPIC PAGE 3 ORIGINAL ART (2013, DC). Superman battles The Wraith on this Epic Jim Lee/Scott Williams splash page from Superman Unchained #3 (2013). The Wraith was an alien superweapon used by the US government and faced by Superman. He was created for the Superman Unchained series and he's one of the more formidable foes Superman has ever faced. This is among the most intense Superman images we've seen and it would make an incredible display piece for one of the untold legions of fans of both Lee and the Man of Steel. It was exciting for fans to see Lee return to Superman several years after completing the popular "For Tomorrow" saga. Superman Unchained was a nine-issue mini-series that teamed Lee up with superstar Batman writer Scott Snyder to celebrate Superman's 75th birthday. It was published during the New 52 era. Note: Opaque white was used for artist effect, but there is also some opaque white used near the top of the page for correction purposes. Signed by both Lee and Williams at the bottom. Art is in excellent condition. Jim Lee is the #1 artist of our generation with his powerful work being in high demand for over 30+ years now!

He got his start working for Marvel in the late 80s, illustrating Alpha Flight before shooting to superstar status on Uncanny X-Men. In the early 90s, Lee and several other artists formed their own company, Image Comics, to publish their creator-owned titles, with Lee publishing titles such as WildC. S and Gen13 through his studio, Wildstorm Productions. From 2010 to a couple of months ago, Lee was Co-Publisher of DC Comics, overseeing the successful New 52 and Rebirth initiatives.

His new role is Publisher and Chief Creative Officer and he's currently the spokesperson for the company. Hopefully the new gig will give him more time to draw! Here at Holy Grail Collectibles we focus on only the rarest items, the best of the best and most sought after collectible Comics, Disneyana cels and drawings, Art and Memorabilia. Feel free to reach out with any questions or anything I can help with.

The item "JIM LEE SUPERMAN UNCHAINED #3 SPLASH EPIC BATTLE PAGE 3 ORIGINAL ART (2013, DC)" is in sale since Friday, May 28, 2021. This item is in the category "Collectibles\Comic Books & Memorabilia\Original Comic Art".

The seller is "holygrailcollectibles" and is located in San Francisco, California. This item can be shipped to United States, Canada.