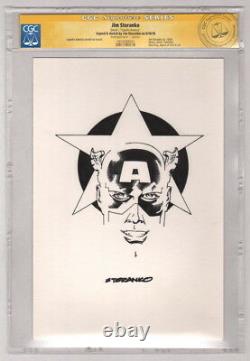 Drawn on a comic backing board, this stunning sketch of Captain America is illustrated by hand by legendary comics creator Jim Steranko. It is certified authentic by CGC.
As with all CGC Signature Series collectibles, a certified witness actually observes the signing of the item in question and then takes possession of the item so there is no possibility of the real autograph being switched out with another. A legendary and tremendous talent Jim Steranko (1938 -) is the Renaissance Man of the industry. An illusionist, escape artist, magician, musician, writer, historian, philanthropist, publisher and, first and foremost, an artist not only for comics but as both a novel cover and film production illustrator.

In an industry that was at the time mostly considered cartoonish and only for children, Steranko brought the noir sensibility to comics, not only outstripping but making his contemporaries take note. His characterizations, narrative themes, visual style and the sheer power and action of his art are legendary hallmarks of his work, a study of which includes a long and prestigious list of projects and characters. From his work on Marvel's Nick Fury: Agent of Shield, The Uncanny X-Men, Strange Tales, and Captain America to his stunning covers for The Shadow novels and other great pulp characters, Steranko's work has also found its way into film and other media; Bladerunner, Sherlock Holmes, his landmark History of Comics, Bram Stokers Dracula, Raiders of the Lost Ark, and countless novel covers to name but a few. Inducted into the Will Eisner Comic Book Hall of Fame in 2006, he is considered by many to be the Godfather of Modern Comics.