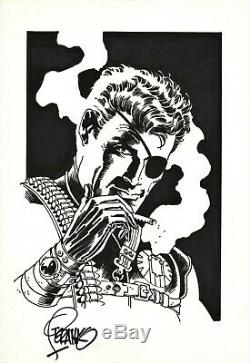 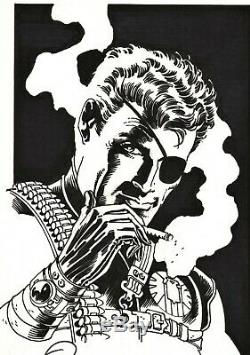 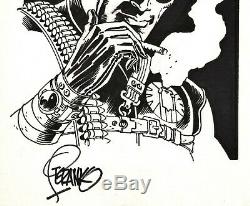 This is the original art to 5 1/2 X 8 1/2 inch Nick Fury pen and ink illustration by Silver and Bronze Age legendary artist, Jim Steranko! "Jim" Steranko (born November 5, 1938) is an American graphic artist, comic book writer/artist, historian, magician, publisher and film production illustrator. His most famous comic book work was with the 1960s superspy feature Nick Fury, Agent of S. In Marvel Comics' Strange Tales and in the subsequent eponymous series. Steranko earned lasting acclaim for his innovations in sequential art during the Silver Age of Comic Books, particularly his infusion of surrealism, op art, and graphic design into the medium.

His work has been published in many countries and his influence on the field has remained strong since his comics heyday. He went on to create book covers, become a comics historian who published a pioneering two-volume history of the birth and early years of comic books, and to create conceptual art and character designs for films including Raiders of the Lost Ark and Bram Stoker's Dracula. He was inducted into the comic-book industry's Will Eisner Comic Book Hall of Fame in 2006. The art on this piece was penciled and inked by Jim Steranko! Jim has signed the art on the bottom of the board!

PLEASE NOTE: This is an original, hand drawn piece of Jim Steranko Nick Fury art, not a print, copy or facsimile! This is a 5 1/2 X 8 1/2 inch Nick Fury illustration on a 7 X 10 inch piece of illustration board!
It is in excellent condition and would make a great addition to any Nick Fury, S. It could also make a great gift! These charges are the buyers responsibility. And, check out my other auctions for great original comic book art! I apologize for the inconvenience. The item "JIM STERANKO SIGNED NICK FURY ORIGINAL ART-S. D, AVENGERS" is in sale since Friday, January 31, 2020. This item is in the category "Collectibles\Comics\Original Comic Art\Interior Pages". The seller is "stevo861" and is located in Fort Lauderdale, Florida. This item can be shipped to United States.