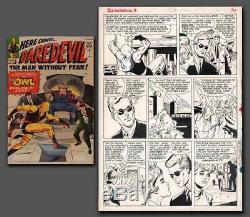 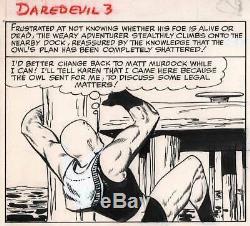 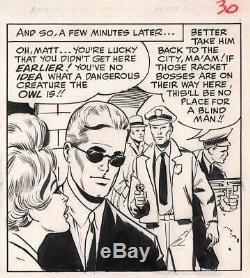 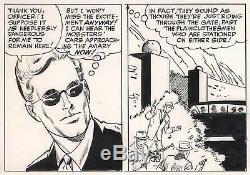 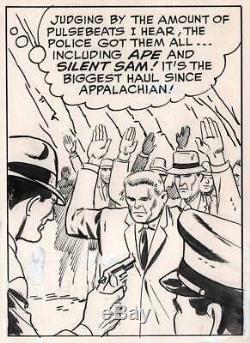 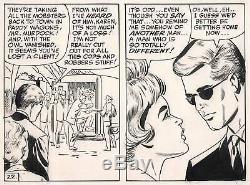 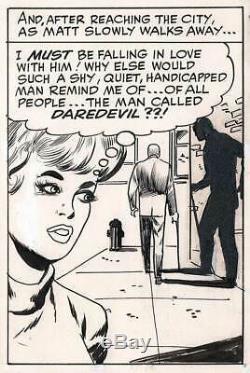 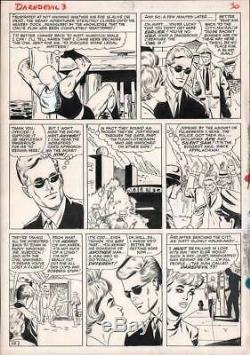 Joe Orlando and Vince Colletta. #3 " Daredevil Battles The Owl, Ominous Overlord Of Crime " Page 22 Original Art (Marvel, 1964). This sensational page is from the THIRD issue of DAREDEVIL, which featured. The Owl, one of Daredevil's greatest foes, making his first appearance in this very issue. This page showcases the very beginnings of the relationship between MATT MURDOCK and KAREN PAGE.
The page also features DAREDEVIL. Sporting his classic original yellow, black and red costume, as well as the OWL'S mobsters being rounded up by the police.
This is serious MIGHTY MARVEL MAGIC written by STAN "The Man" LEE. This page was created twice-up scale in ink over graphite on Bristol board. With an image area of 12.75" x 18.25" inches.
There is very slight whiteout art correction used on DD's backpack pouch in the first panel, and some used on Karen's cheek in the final panel, otherwise the artwork is in excellent condition. The artwork also has the Comics Magazine Code Authority stamp on the back which is dated and signed on March 30th, 1964. The item "JOE ORLANDO & VINCE COLLETTA DAREDEVIL # 3 Original Page 22 (MARVEL, 1964)" is in sale since Wednesday, October 30, 2019.
This item is in the category "Collectibles\Comics\Original Comic Art\Interior Pages". The seller is "comic-mint" and is located in Burbank, California.
This item can be shipped worldwide.