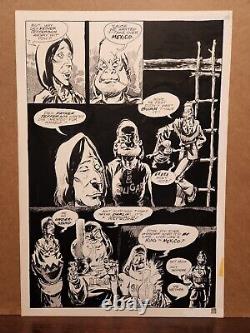 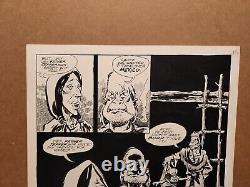 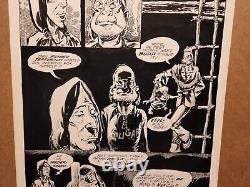 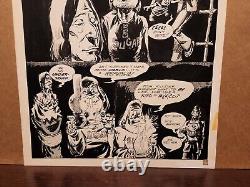 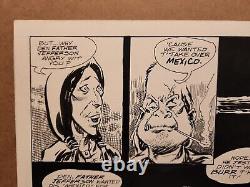 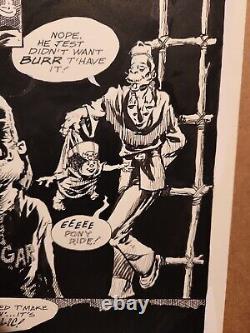 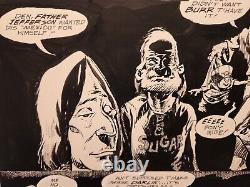 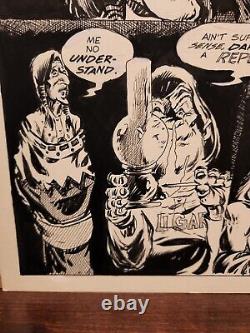 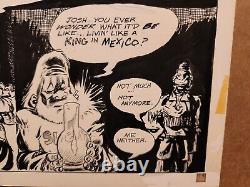 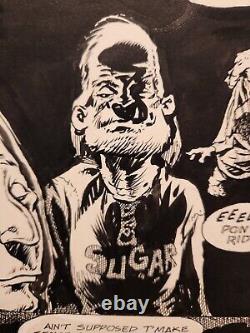 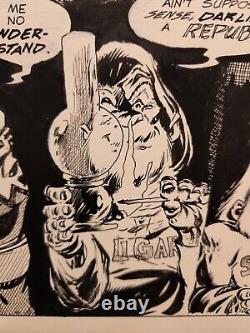 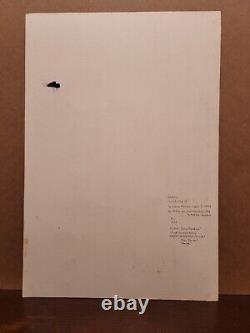 Offered for sale is the original artwork for a panel page from JOURNEY (Joshua "Wolverine" MacAlistaire) comic book by William "Bill" Messner-Loebs. Art Type: Comic book panel page original artwork.
Journey, issue #8, page 15. Medium: Pen and ink over pencil/graphite on art board.
Publication Dates: 1984 (cover date March 1984). Dimensions: 16" tall by 11" wide (board dimensions; image slightly smaller). Description: This is the original artwork for a panel page from Journey comic book story featuring Joshua Wolverine MacAlistaire by William "Bill" Messner-Loebs b. This page was originally published as page 15 of issue 8 of the comic book Journey (Aardvark-Vanaheim 1984) and was reprinted at page 200 of Journey: The Adventures of Wolverine MacAlistaire Volume 1 (IDW 2008). The comic book Journey told the adventures of Joshua "Wolverine" MacAlistaire, a frontiersman, guide, trapper and explorer of the Old Northwest Territory in the early 19th century.

The comic book was described as follows in house ads: Life on the Michigan frontier was filled with Adventure, Fear, Battle, Murder and Death... And then there were the Bad Days. The comic book told of Wolverine MacAlistaire and his encounters and adventures with various (and mostly unfriendly) animals, French and British soldiers and spies, Native Americans, settlers, other frontiersmen, and an assortment of bizarre characters seeking fulfillment in the wilderness. The sequel (sadly, never completed as only 2 books of a planned 6 issue series were published) Journey: War-Drums, tells of the War of 1812 in the Northwest frontier.

This page, from the story titled "Up-Country Shelter" features Wolverine MacAlistaire, his pal Crawfish Martin, Martin's wife Sally Shadow Dark and their son Joker aka Pony ride (this issue was the first appearance of Crawfish, Sally and Joker). After struggling through the brutal cold and snow to find Crawfish, a journey testing Wolverine's strength and endurance to the limit, the warmth of Crawfish's cabin is welcome relief. Joshua and Crawfish relate the tale of their involvement with Aaron Burr and his plan to create an empire in Texas, the southwestern US territories and Mexico. A wonderful example of Messner-Loeb's artistry from a peak period of the comic book.
A well designed and beautifully drawn (the inks are superb) page featuring his signature character by long-time comic book writer and artist, Bill Messner-Loebs. The art is in excellent overall condition. Please check my other listings for a selection of books, graphic novels, original comic art, CDs, DVDs, knives, and other collectibles.

This item is in the category "Collectibles\Comic Books & Memorabilia\Original Comic Art". The seller is "rfcarlinii" and is located in this country: US.