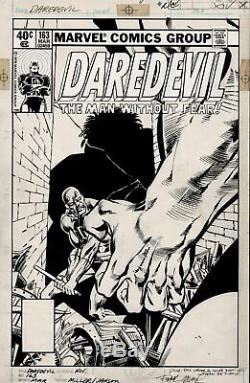 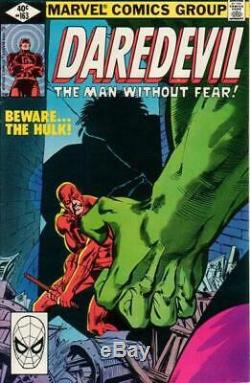 DAREDEVIL #163 COVER DAREDEVIL VS. This one is truly a "grail" cover!
Frank Miller's original cover artwork here to Daredevil #163 features the memorable image of Daredevil bracing for battle with the Incredible Hulk in an alley, as the Hulk (and his HUGE shadow) get closer and closer to Daredevil! Rarely do you see any Daredevil cover art from Frank Miller's acclaimed run surface for public sale, and when they do, they are never this good! The stark contrast in figuration between the two popular Marvel mainstays (hard to refer to them both as heroes when the Hulk is the antagonist in this one) and skillful use of shadow creates a sense of Daredevil as underdog, standing strong, alone yet customarily fearless against the odds..
With a busted up bloody jaw as he holds his billy club with both hands! Inks are by Joe Rubinstein, who a couple of years later would finish Miller's pencils on the acclaimed Wolverine Limited Series! Frank Miller's historic run on Daredevil #158-#191 has been considered one of the best comic runs in the history of the medium. The opportunity to own a strong, early "SIGNED" Miller cover (and Jim Shooter signed) from this DD run is no doubt an exciting opportunity for original art collectors!
Miller had only been working in comic books for a year when he was given the opportunity to draw Marvel's long-running blind superhero title in 1979. Miller's UNIQUE approach took off and the book grew in sales every issue. Miller's work has been reprinted multiple times and has inspired the work of hundreds of later creators! Compare this nice cover art to the published comic book above!

WE SELL MORE HIGH QUALITY ORIGINAL COMIC ART THAN ANYONE IN THE HOBBY, WITH OVER 30 YEARS EXPERIENCE & TOP NOTCH CUSTOMER SERVICE! Overseas orders are ALL sent via FEDERAL EXPRESS, and cost is 100.00 for up to 10,000 Value of art. Please message us for a speedy reply! The item "MILLER, FRANK DAREDEVIL #163 COVER ART (DAREDEVIL VS.) 1980" is in sale since Monday, March 11, 2019.