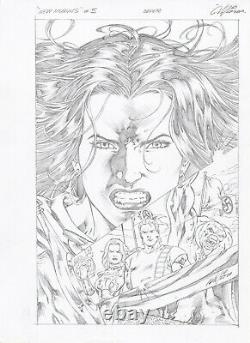 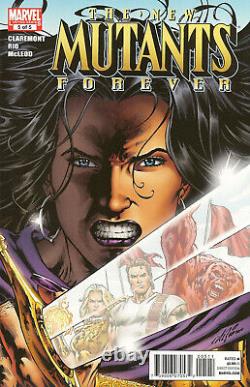 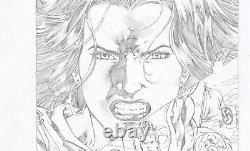 New Mutants Forever #5, Cover Prelim by Al Rio Original Art. 8.5"x11" on Paper. This is the one (of the 5 prelims) which Marvel chose for the cover! It's on 8.5x11 paper. It's finely drawn (as Al was known to do) and signed. Álvaro Araújo Lourenço do Rio (19 May 1962 - 31 January 2012) - known professionally as Al Rio - was a Brazilian comic book artist, best known for his "good girl" illustration work, particularly on the American comic book series Gen¹³ and DV8, published by Wildstorm Comics. Published by Marvel Comics in 2010. It comes to this-the final showdown for the fate of Nova Roma. And that of the New Mutants themselves! The ultimate threat is revealed, and still the team stands divided. Will the New Mutants be willing to take down their own friends to do what's right?

And can the team survive what must be done? Legendary X-scribe CHRIS CLAREMONT and stellar art team AL RIO and BOB McLEOD conclude their continuation of CLAREMONT's epic run in the only way they know how.

This item is in the category "Collectibles\Comic Books & Memorabilia\Original Comic Art". The seller is "buymycomicsandrecords" and is located in this country: US.
This item can be shipped to United States.