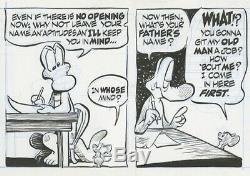 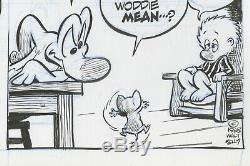 Original Pogo Strip by Walt Kelly! Surely you got a place for him on your staff! Featuring Pogo, Albert and Mouse! This is the original artwork, inked by Walt Kelly using a brush, for newspaper syndication on the day indicated.

The strip is in good condition, with some aging as shown in photos. The strip is signed by brush by Mr.