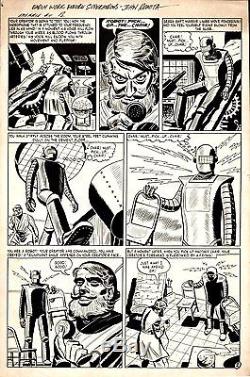 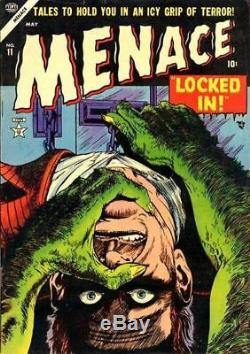 MENACE #11 INTERIOR PAGE 2 (1954). Check out this very nice, very EARLY 1954 GOLDEN Age large Art ATLAS (MARVEL) COMICS page which was penciled and inked by the great John Romita, from the classic story titled: I, The Robot! Very little GOLDEN AGE ATLAS art by the great John Romita is known to exist, yet here is a classic VERY early science fiction page, which was penciled and inked by the Jazzy one! In this story, a robot is given a command to kill the man in the room by someone who wishes to steal it after the robot has slain its creator. When the would-be thief enters the room, the robot slays him as well, then the robot goes out into the night looking for rooms to slay men in. This classic EARLY john Romita story has been reprinted at least 4 other times: Weird Wonder Tales #5 (August 1974) Marvel Visionaries: John Romita Sr. (Marvel, 2005) Agents of Atlas (Marvel, 2007) and Marvel Masterworks: Atlas Era: Menace (Marvel, 2009) John Romita signed this art at the top and added the extra special hand written note at the top which reads: EARLY WORK BEFORE SUPER HEROES --- JOHN ROMITA. WE SELL MORE HIGH QUALITY ORIGINAL COMIC ART THAN ANYONE IN THE HOBBY, WITH OVER 30 YEARS EXPERIENCE & TOP NOTCH CUSTOMER SERVICE! Overseas orders are ALL sent via FEDERAL EXPRESS, and cost is 100.00 for up to 10,000 Value of art. Please message us for a speedy reply! The item "ROMITA SR, JOHN MENACE 11 PG 2 GOLDEN AGE ORIGINAL ART (1954)" is in sale since Wednesday, July 23, 2014. This item is in the category "Collectibles\Comics\Original Comic Art\Interior Pages". The seller is "romitaman" and is located in Ravenna, Ohio. This item can be shipped worldwide.