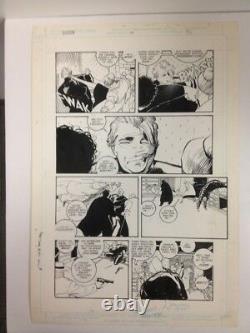 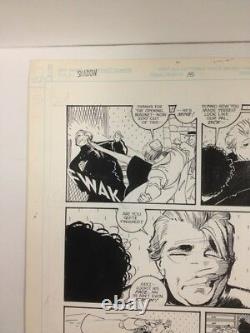 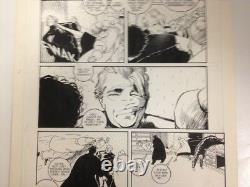 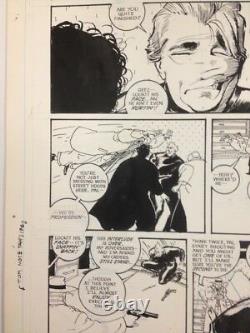 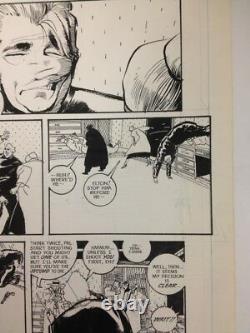 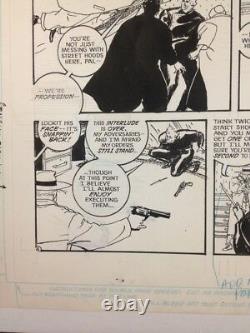 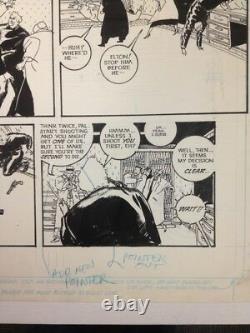 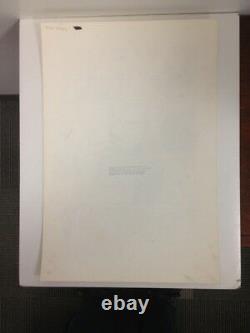 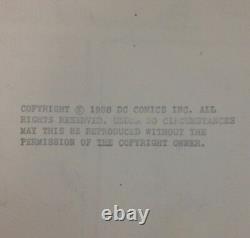 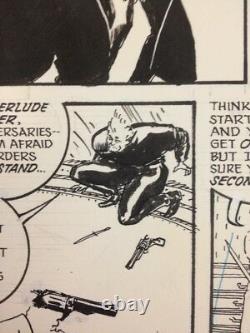 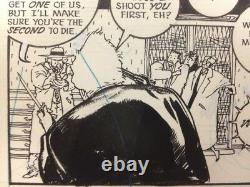 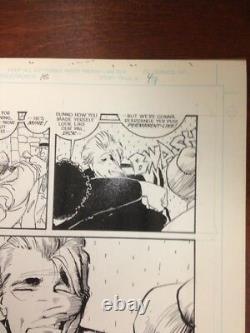 Offered for sale is the original art from the comic book THE SHADOW drawn by Kyle Baker. This comic book panel page was published as page 4 of issue 18 of THE SHADOW comic book, published in 1988 by DC Comics.

The DC Comics art paper measures approximately 17.125 tall by 11 wide. It is not signed or dated. This is the original art (rendered in pen and ink over pencil/graphite) for this comic book page, drawn by Kyle Baker (pencils and inks), with dialogue written by Andy Helfer. A very scarce Baker original from this title featuring another classic pulp crime fighter. Does anyone ever really die in comics?
Meanwhile, Twitch, trying to fill the void left by the absence of'the master of men', assumed the identity of a vigilante crime-fighter,'The Innoculator' and began to fight crime, in a manner more ruthlessly than The Shadow (if that's possible). For some strange reason, however, he dyed himself green.
The other members of The Shadow's team, meanwhile, searched for a new leader to give their efforts some direction. Richard Benson, aka The Avenger, and former head of Justice Inc. Was hired to hunt down The Innoculator after he executed some crooked cops who were in the process of beating a junkie to death. The Avenger, wielding'Mike and Ike' (his gun and knife) faces off (no pun intended) with The Shadow's team Mavis, Elton, Dr. , in the Shadow's old underground headquarters, and amply demonstrates his'plastic face' abilities.

Panels by Kyle Baker; and b. Eautiful page design and execution from a peak period of the book.

Baker's talent is on full display in this action page. The art includes a copy of the comic book issue (Shadow #18) in which this art was originally published. Comic Book and Artist Information.
Is an American crime-fighter who originated as a character in a radio serial from the 1930s, and also appeared in pulp magazines, radio, television, movies, comic strips and comic books. The character was, for the most part, created by writer Walter Gibson, and served as a template for many subsequent crime fighters and super heroes, particularly Batman. 1965 is an American comic book artist best known for his work for Marvel (Deadpool and others) and DC (The Shadow, Plastic Man, and others) and graphic novels. The art is in excellent condition on art paper. No stats, paste-overs (except for words "We're professionals" in word balloon in 4th panel).
Blue pencil and ink directions (probably by Baker) in margins (the "Tom, Note Tam's Leg" comment is apparently to colorist Tom Ziuko). Owned by an adult collector in a smoke free home. International buyers please wait for an invoice from me before paying. Ease check out my other auctions for a selection of comics, graphic novels, trade paperbacks, books, toys, video games, CDs, original comic book, comic strip and illustration art, knives, and other collectibles. The item "THE SHADOW Issue 18 p 45 Original Comic Book Art KYLE BAKER Avenger Justice Inc" is in sale since Wednesday, December 27, 2017.
This item is in the category "Collectibles\Comics\Original Comic Art\Interior Pages". The seller is "rfcarlinii" and is located in Kings Park, New York. This item can be shipped worldwide.