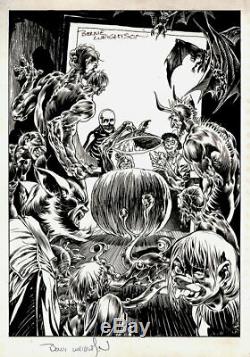 WRIGHTSON, BERNIE: A LOOK BACK. TRICK OR TREATERS' PUBLISHED ILLUSTRATION. AND AN UNPUBLISHED COVER (1973). Bernie Wrightson - Pencils And Inks.

Check out the stunning detail on this amazing 1973 published illustration titled: Trick or Treaters! Art was drawn in pencil and ink, and published on page 172 of his monograph Bernie Wrightson: A Look Back. Depicting several legendary Wrightson favorites, which remained a constant theme of his most popular early 1970's works! We have SEVERAL Monsters, creatures, Zombies, demons, bats, an evil pumpkin, and a werewolf, all opening the large door to greet 3 young kids dressed up as a skeleton, Clown, and a scarecrow! This beautiful piece came from Bernie Wrightsonâs personal files and was Likely created as a cover for DC Comics, but never used.

Bernie Thought so highly of this art that he published it as a full page splash in his great 1970's Biography book! Drawn image area measures 10.2 by 14.25 inches on 11.4 x 16.6 inch art board. Art is Signed originally in lower left border and again in the upper blank area of the art. No cartoonist can capture the essence of horror quite like Wrightson, and this page would be considered by many fans as the "perfect" Wrightson piece! This is among the finest Swamp Thing examples you will find by the Master of the Macabre! From his groundbreaking work on Swamp Thing, into the "Studio" era with colleagues Barry Windsor Smith, Michael Kaluta, and Jeff Jones, and onto mainstream visibility in the 1980's with projects like Cycle of the Werewolf and Creepshow, Wrightson's accomplishments and influence has been as broad as any artist emerging from the realm of comic art. His work in comics and illustration art is in a class by itself among collectors and fans of the medium. WE SELL MORE HIGH QUALITY ORIGINAL COMIC ART THAN ANYONE IN THE HOBBY, WITH OVER 30 YEARS EXPERIENCE & TOP NOTCH CUSTOMER SERVICE! Overseas orders are ALL sent via FEDERAL EXPRESS, and cost is 100.00 for up to 10,000 Value of art.

Please message us for a speedy reply! The item "WRIGHTSON, BERNIE A LOOK BACK'TRICK OR TREATERS' PUBLISHED ILLUSTRATION -1973" is in sale since Tuesday, March 12, 2019. This item is in the category "Collectibles\Comics\Original Comic Art\Other Original Comic Art". The seller is "romitaman" and is located in Ravenna, Ohio. This item can be shipped worldwide.